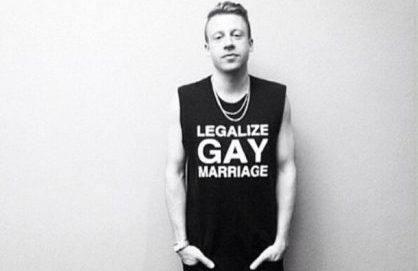 What do gay marriage, hip-hop and moon-men have in common? Macklemore and Ryan Lewis, the hip-hop duo from Seattle, know the answer. Hint: It has to do with love. “Same Love” (featuring Mary Lambert), as part of their 2012 debut studio album, The Heist, may not be the first song supporting the Lesbian, Gay, Bisexual, and Transgender (LGBT) community; but being the first Top40 song in the United States to promote and celebrate same-sex marriage, a MTV Video Music Awards (VMAs) winner, and number 11 on the Billboard Hot100 chart can only mean two things: It’s either the country’s first official gay anthem or the source of all evil.

First released almost a year ago, “Same Love,” as part of Music for Marriage Equality campaign, went sky high in June 2012, in the light of Washington Referendum 74, negotiating the legalization of same-sex marriage in the state. With a soul piano backing Mary Lambert’s enchanting, mellow voice in the chorus, Macklemore, known for his smashing hit “Thrift Shop” that reached number 1 of the Billboard Hot100 charts, masterfully weaves in the hip-hop parts, unwrapping both the tragedies and the triumphs of gay people. Serving as a shout-out in favor of gay marriage and the celebration of individuality, the song raises social awareness embracing universal themes, such as love, identity, family, religion, stereotypes and discrimination. Moving from the personal to the local, to the national and eventually the international level, the desire for “same love” takes a whole new meaning reflecting the needs of the colourful members of LGBT society for same rights, same value, same treatment, same everything.

Apart from embracing gay marriage, the song focuses on the tense relationship between identity and music. “If I was gay/I would think hip-hop hates me,” sings Macklemore, explaining to Studio 360’s Kurt Andersen, “misogyny and homophobia are the two acceptable means of oppression in hip-hop culture.” The song that “was written with the hope that it would facilitate dialogue and through those conversations understanding and empathy would emerge,” as the artist states, focuses on the idea that gay people don’t need to be cured. “I can’t change/even if I tried/even if I wanted to,” tenderly sings Mary Lambert unfolding to the Seattle Times her personal story, “I fought it for a long time, then I fell in love with another girl and then I decided I would repent every day, because I knew I wasn’t going to change. But that was absurd.”

Due to the song’s controversial nature, it comes as no surprise, that Macklemore was quickly put under fire with various accusations such as trying to make money off of the same-sex marriage burning issue, and being out of his rightful place, talking about gay rights from his stereotypical “straight, white male” perspective, among others. Funny, considering that this happens in the pseudo-liberal country, where teaching children how to put a condom on a banana in schools is okay, but gay equality is over the top.

The music video for “Same love,” directed by Ryan Lewis and Jon Jon Augustavo, and produced by Tricia David, was released in October 2012 and has over 100 million views on You Tube, today. Extremely touching beyond gender, age and beliefs it follows the life story of an interracial gay man and his same-sex partner from the moment they fall in love, till death sets them apart. Timeless, reflective and always relevant, “Same Love” proves not only that “love is patient, love is kind,” (lyrics) even among the diverse identities, but also that “music with a social message” according to its MTV VMA, can be music worth listening to.