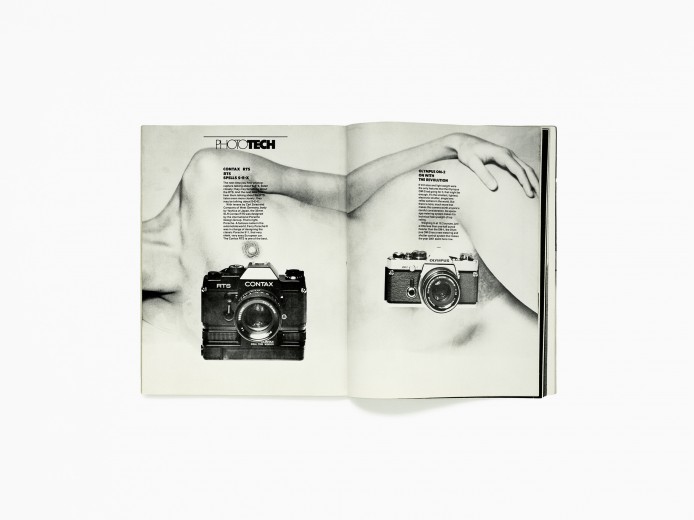 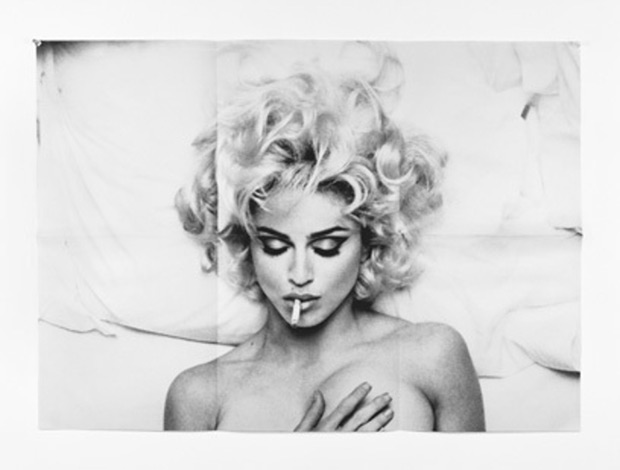 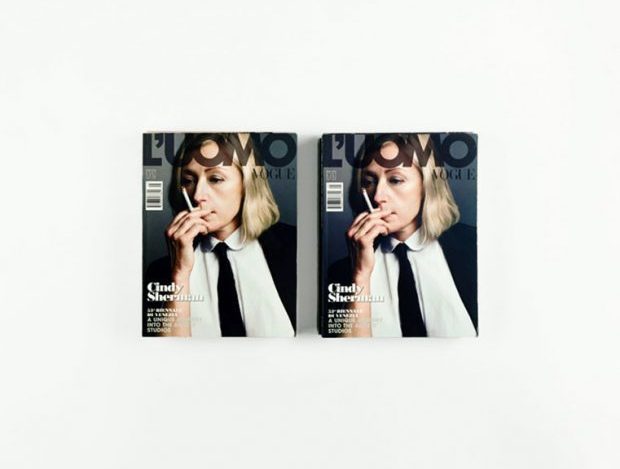 Anne Collier photographs photographs. Exploring themes that come a long way shaping contemporary art and culture –pop psychology, the conventions of commercial photography, the nostalgia of decades past, the power relationship of seeing and being looked at– her work is a rare opportunity for dialogue across the fine line that lays between preconceived ideas, clichés and stereotypes, and ingenious artistic vision. The major retrospective, currently on view at the Museum of Contemporary Art (MCA) Chicago, spans Collier’s career during the past decade, giving a new spin to heavily photographed subjects and themes overly analyzed.

Still life compositions of preexisting images, found objects and pop culture paraphernalia –old record covers, posters, pin-up calendars, pop culture magazine spreads and film stills among others– challenge the way the photographic image is presented to and perceived by the world at large. Photographed against flat, plain-white surfaces that leave little to no space between her object and the viewer, Collier’s heavily autobiographical, large-scale framed pieces of dominant commercial culture segments, become emotionally and psychologically loaded. Her phenomenologically detached photographic style in reality reveals an increased focus on perceptions and feelings; an often romantic and sentimental imagery open to interpretation. Hollywood film stills, vintage nude girls’ calendars and contemporary magazine covers bring together fictional and real female characters: Marilyn Monroe holding a camera wearing black evening gloves, Cindy Sherman on the cover of L ‘uomo Vogue, the Italian men’s magazine, Faye Dunaway shooting pictures with a Nikon for the 1978 thriller film Eyes of Laura Mars, a postcard of a bare-chested, Kenya-native woman, and a California girl, who’s been experimenting with photography since her early teenage years –the artist herself– all share a common destiny: the potential to manipulate and be manipulated by the camera lens.

Isolating commercial images and re-photographing them for the purposes of her series Woman with a Camera, Collier’s subjects manage to reverse the male gaze. Exploring women, the camera and the two-way relationship that formulates both, the artist focuses on faces partly obscured behind the lens, on poses rather cliché and expected, and on the emotional and psychological associations of the act of looking. Unapologetically empowered, Collier’s heroines now turn their cameras back on the viewer. The lens has been shifted. Is it the camera itself that now becomes the subject matter, or is it the hand behind it that determines the object in focus?

Following a long conceptual artistic tradition, Collier’s still-life photography adds emotional complexity to what to the naked –untrained­– eye might seem like plain appropriation. Organized in thematic constellations, her work blurs the lines between the personal and the universal, the physical and the emotional, the artist and the viewer, enabling the latter to construct their own narratives. Challenged by the flatness of her, straight-forward, mainly, two-dimensional work, she redefines commercial photography. Expanding beyond and above contemporary photography stereotypes, the artist creates an interactive experience forcing the viewer to newfound aesthetic depths. There, through reflection and self-exploration, one could not only redefine their aesthetic approaches, but also themselves as a whole.