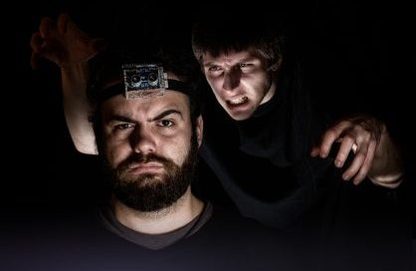 Greek-descent, Victor Mateevitsi, believes in the new and improved super-human. Currently a PhD student at UIC, he is travelling to internationally acclaimed scientific conferences, suits up in his latest invention, the “SpiderSense,” and explains how a suit, covered in sensors on small robotic arms, and microphones that pick up ultrasonic reflections from objects, can make you feel the environment around you. Awarded one of the Fifty [brightest] For The Future, Mateevitsi, shows up wearing the Google Glass and talks about human enhancement and how much science/fiction can real life handle.

Vasia Rigou: You’ve been part of the Electronic Visualisation Laboratory (EVL) for 4 years and you’ve already been featured in several leading science magazines and blogs.

Victor Mateevitsi: I guess everything started when I first visited the lab as a new PhD student. I was fascinated by the futuristic research going on. Soon I was offered a Research Assistantship, became part of the team and started brainstorming on how sensor miniaturization is paving the way for technology to enhance humans. Already interested in the field, I took a Human Augmentics class with the mission to build a device that can “see the invisible.” Two years ago, with a name inspired by its superpowers, “SpiderSense” came to life.

VR: What about Human Augmentation intrigues you the most?

VM: Having the ability to sense the world around us in a whole different way. Using technology, our eyes can see the invisible, our ears can hear the inaudible, and our minds can conceive the inconceivable. The only way not to become obsolete when, according to futurists’ predictions, computers surpass human intelligence –a moment in time referred to as singularity, is to augment ourselves with technology.

VR: Human augmentation is a lifestyle change by choice, designed to give a person an edge, moving beyond disability culture. Is “hacking humanity” a social threat?

VM: The first augmentation devices that humans built were tools that allowed them to hunt, forage and protect themselves. Some of those, like weapons, were historically used against humanity in indescribable ways. As scientists and humans it is our duty to establish the ethical and social boundaries to the way the rapidly accelerating power of such technologies is used.

VR: Is Google Glass a product for the geekiest of geeks -no offence! or could it really change the way we live our lives?

VM: The first iPhone changed the way we interact with the world. Can you imagine living without your smartphone, for a week? Similarly, with the Google Glass -we have yet to explore its potentials.

VR: Human adaptability lags behind the pace of technological change, are we socially ready for wearable computers?

VM: Apparently we are still trying to figure this one out. People wearing weird devices get awkward looks, Glass Explorers in San Francisco are sometimes referred to as “Glassholes;” on the other hand, such devices can fundamentally change our lives! We may not be ready for extreme scenarios but we are definitely ready for devices aimed for well-being such as fitness trackers and health monitors. Who doesn’t want to be healthier?

VR: Any plans for the future? “SpiderSense” sensor implants, maybe?

VM: Graduating of course! (laughs) I am currently working on some new devices and apps on motivating users to change their routine patterns for well-being. I don’t like scalpels, so no implants yet! I do have some plans for future user studies and experiments with “SpiderSense,” though.