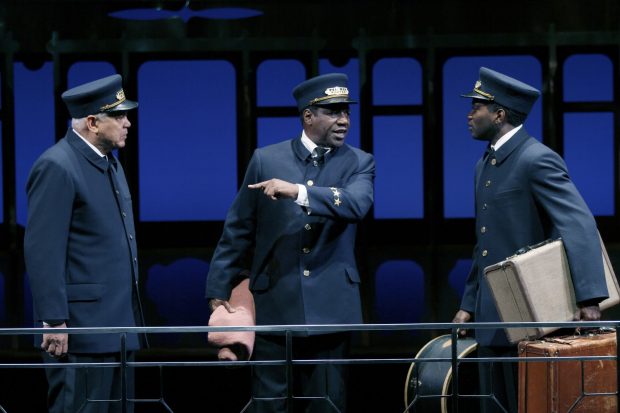 The roar of the train could echo deep in your heart if you board the Panama Limited Pullman Train now on stage at Goodman Theatre. This trip down memory lane offers a dash of history and a look at troubling race issues that remain unresolved.

Pullman Porter Blues takes its audience on a trip “down in hell’s direction.” The journey from Chicago to New Orleans is accompanied by some excellent music that enhances the many historical layers of a captivating play focused on the African-American porters who worked on the luxurious sleeping cars, and their lives on and off the rails in 1930s America, as they pursued their own version of the American Dream.

The play, under Chuck Smith’s direction, takes place on Designer Riccardo Hernandez’s perfect replica of a Pullman car that speeds along past a series of historical photos depicting a different reality from that on the upper-class train. On the historic night of June 22nd, 1937, when black boxer Joe Louis beat James J. Braddock in the World Heavyweight Championship in Chicago, we find three generations of the Sykes family working as Pullman porters. Monroe Sykes (Larry Marshall) has been grateful to be working as a Pullman porter for 50 years. His son, Sylvester Sykes (Cleavant Derricks), is fighting to organize the Brotherhood of Sleeping Car Porters, the first African-American Union. His grandson, Cephas Sykes (Tosin Morohunfola), has just finished his first year at the medical school of the University of Chicago and he represents his family’s hopes and dreams for a better future.

“Only thing a man should ever be scared of,” according to his old-school Grandfather Monroe, a son of slaves,  “is getting too old to do his job or to protect his family.” He is the one who landed a summer job as a Pullman porter for his grandson Cephas, while his father Sylvester dreams of his son doing something other than enduring a porter’s struggle to maintain dignity through long shifts, low wages and dealing with autocratic, racist white conductors (here played by Francis Guinan)  –all while providing service with a smile. A young stowaway, Lutie  (Claire Kander), adds trouble but the play takes an intriguing and melodic twist when blues singer Sister Juba, (E. Faye Butler) a woman who ”don’t-take-shit-from-nobody” boards the train on her way to a gig in New Orleans. Monroe may have “never seen so many jewels and feathers” on a person but it is her flamboyant personality and deep blues voice that transforms the scene into a late-night blues bar of times past.

“Sweet Home Chicago” is among the great Chicago blues classics that roar across the stage, much as the train engine itself roars. The only problem with this otherwise beautifully recreated blast from the past, apart from the lukewarm Lutie, is the sometimes-weak plot that takes a little too long to reach its destination.