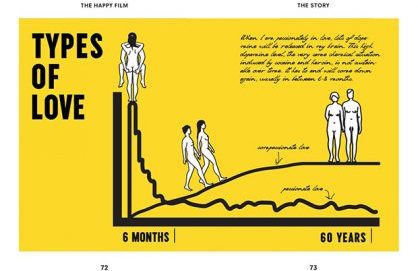 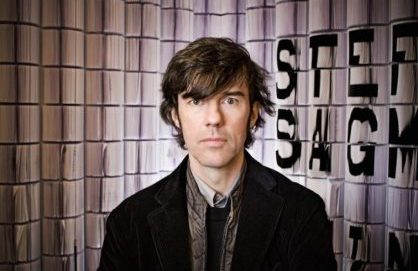 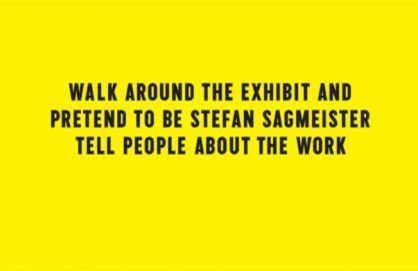 Love. Family. Sunshine. Dream job. Money, maybe? Good news for shiny, happy people of Chicago. Or anyone who has ever given any thought on whatever it is that makes them happy. Well, there’s no need to. Because Stefan Sagmeister did it for everyone’s sake and he will be spending almost two months, until September 23rd, at the Chicago Cultural Centre sharing the news. He welcomes his visitors in his bright yellow “Planet happy”, makes them smile, gives them candy, and let’s them ride his bike. And all he asks in return is that they draw their own symbol of happiness for him and drop it in a box. Which is, of course, yellow.

The Austrian-born, New York-based graphic designer with his wit and high imagination turns happiness or the lack thereof into Art through a sometimes painful but without doubt honest confrontation of The Self.  “Everything I do always comes back to me” reveals the artist who researched happiness for oh so many years, ten in count. That means he has every right to gather everyone around his round, white-black-and-yellow table and shed some serious light on what we think makes us happy and what actually does. Or doesn’t.

Happiness confrontation, number one: Right in the entrance of the gallery a huge couldn’t-ignore-me-if-you-tried machine ready to shoot advice cards illuminating the road to happiness. To anyone who’s brave enough to press the button of course. Happiness confrontation, number two: A ten gumball-machine compilation that may look like a fun-house game but it is actually a trap! Taking one yummy gumball of the corresponding, numbered machine would eventually reflect the happiness levels of the artist’s guinea pig-visitors.

Moving across the gallery the impact of religion, money, marriage, children, sex, drugs, are all graphically hyper-analyzed. Does self-confidence make a difference in happiness? Physical activity? Are married people with children happier than singles? Or reaching the dream salary threshold magically pushes the happy button? Is Stefan Sagmeister himself happy? And most important, are all the above myths to be busted as soon as this gallery visit is over? Probably yes.

A couple of projections, smile-activated installations that change colours, more candy and a shiny, white bicycle in the middle on the gallery’s floor. All for the visitors to watch, try, taste, hop on. After playtime, though, it’s time for the real happiness breakdown. And this is where the “hard candy” kicks in. Genetics, life style, psychology are all parts of the happiness hierarchy pyramid right next to a graphic map indicating the levels of happiness worldwide. The visitors seem to have second thoughts about how gorgeous uselessness can be. Or how is an elephant related to psychoanalysis and the exploration of the unconscious.

Common sense becomes not so common anymore and the only thing that’s holding them not to seriously question everything that believed about themselves until this very day is a witty Sagmeister with his delightful, handwritten commentary on well, everything. Whether this is part of the installations, the story of his life or a silly comment on a fire extinguisher, a light switch or a hole on the floor. His designer eye is ever-present as well as his provocative ideas. “Let’s suppose we take five of our retirement years and split them in between our creative, working years. Wouldn’t that make us even more productive in the long run?” he suggests.

Smiling, socializing, being ambitious, self-confident and reward yourself are not things one is unaware of. But orchestrated into a “Happy Show” where every visitor plays his own part makes all the difference. In the end no one could tell if it was the sunshine yellow, crafty Sagmeister’s witty typing or too much candy. Either way having too much fun can be nothing but a one-way road towards happily ever after.