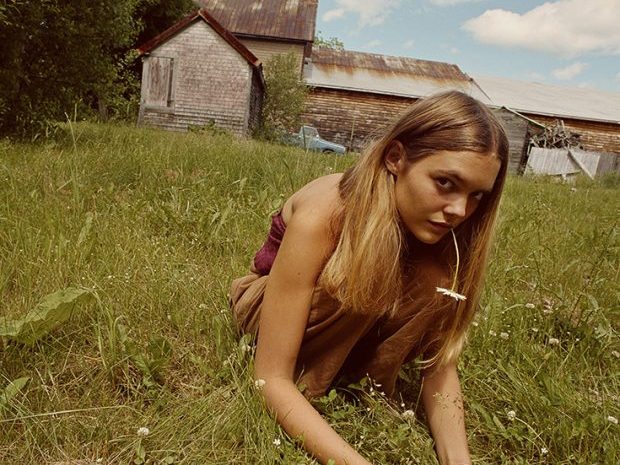 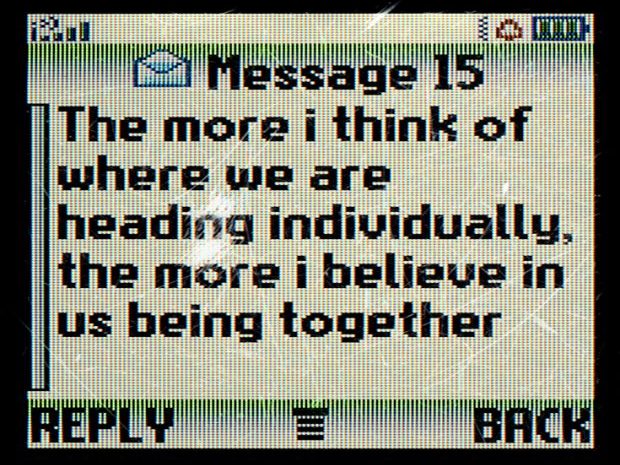 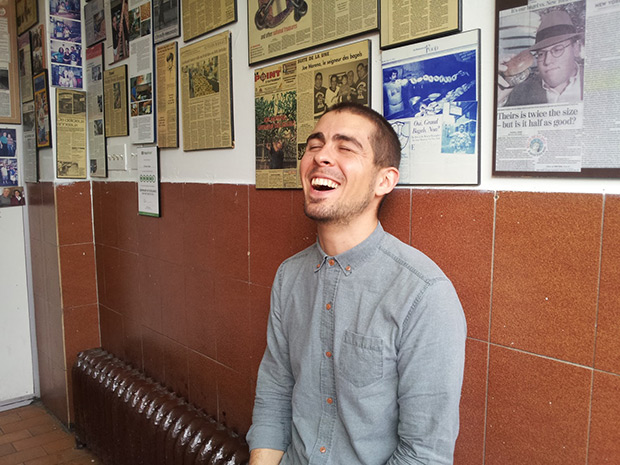 “The more I think of where we are heading individually, the more I believe in us being together,” texts Caroline Annandale to photographer Guillaume Simoneau in the Summer of 2008. Unorthodox? Not for those who know how it feels to be truly, madly, deeply in love. Landed from the Great White North to the Museum of Contemporary Photography, the French-Canadian artist invites the audience to his “Love and War” exhibit, an emotional roller-coaster amidst the deepest layers of his heart.

Simoneau chronicles his own intimate relationship beginning the not so classic boy-meets-girl-story at a Maine Media Photography Workshop back in 2000. Passionate and powerful his on-and-off relationship with Annandale was all-consuming, full of intensity, inspiration and travels around the world. All prior to the terrorist attacks of September 11th, 2001 when she enlisted in the army, was shipped to Iraq and the pink story, turned grey; the photographer was left behind, the two grew apart and Annandale eventually married someone else. Through a series of ups and downs they will be reunited, after her return from war, for the equally dramatic second chapter in their relationship. “The meeting of two personalities is like the contact of two chemical substances,” Carl Jung said a long time ago, “if there is any reaction, both are transformed.” And they were exactly it.

Moving deep into the Columbia College galleries through a maze of rooms, corridors and stairs, feels like a journey that leads to the third floor and Simoneau’s naked and damaged psyche. Through a collection of photographs from the couple’s pre-war life, images that Annandale sent from Iraq, emails, text messages and handwritten notes, the audience explores this tempestuous relationship both satisfying their voyeurism and rethinking their own life stories. The non-chronological journey into a deeply emotional territory touches on universal themes beyond oneself. Heartbreak, abandonment, dedication, death, and “the lasting impact –the invisible, indelible and irresistible effects that both love and war have on people’s lives,” as the artist states. Communication, memory, identity and the important role of the past, as part of the present, unfold, answering questions but at the same time raising new ones.

Experiencing and discounting a cyclone of emotions leave the audience exhausted and disarrayed observing a true love story through scattered words and uncontrollable feelings. Dealing with themes heavily loaded with subtexts that leave issues unresolved hovering over the gallery floor, it is impossible to notice the blurry lines between love and war, past and present, personal and universal. Tightly intertwined but so far apart, the timeless, reflective and always relevant themes change them both. Annandale has left her innocence behind, instead of flowers, her post-war self is now posing with a handgun, Simoneau’s visit is “not a good idea anymore,” as she texts, and watching her “comrades blow into pieces,” her soul is scarred forever. The artist has been transformed, too. Rising from the ashes, he grabs his camera and with a strong, steady hand he turns his heartbreak into art.

Simoneau is standing among his artwork as a part of the exhibit himself, quoting, also Canadian, Margaret Atwood, “When you are in the middle of a story it isn’t a story at all, but only a confusion;” he says, “a dark roaring, a blindness, a wreckage of shattered glass and splintered wood; like a house in a whirlwind, or else a boat crushed by the icebergs or swept over the rapids, and all aboard powerless to stop it. It’s only afterwards that it becomes anything like a story at all. When you are telling it, to yourself or to someone else.” This is how he starts telling his story, this time in words. “I never meant to work on this, it was a beautiful accident,” adding, “eight years of archives can be very overwhelming, but also cathartic. I knew I had to find a way to close this chapter so I saw it [the exhibit] as a way to move on.”

“Exposing my personal life [as art] to everyone is never something I thought I’d explore—in the past, it’s actually something I disliked,” he confesses, “but it represents the truth.” If this a story about what war does to love or about what love does to love is also left unresolved. Exactly as things in life are. Who could tell that the couple’s unbearable romance is over for good or that their own past won’t come back to haunt them? When it comes to love or war, they say, all’s fair. Imagine having to deal with both.